Thanks To The Love Of My Wife 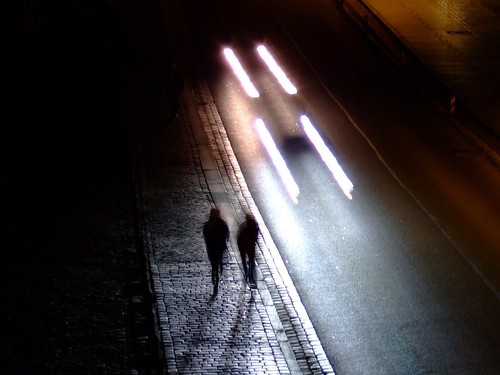 photo credit: marfis75
Post written by Corey Allan. Follow me on Twitter.
If you’ve been reading Simple Marriage for any length of time, and have been commenting at all on the posts, then we’ve had the chance to get know each other a little bit. Today I’m going to be much more personal and share my wife and I’s story.
I’ve written a couple of times about our moment together in the mall food court discussing whether or not our marriage was going to make it, but I’ve yet to share what led up to this discussion.
My wife and I married when we were in our early 20s. I had just completed college, in fact our wedding was a couple of weeks after my graduation. I accepted a job as a youth minister while on our honeymoon, and we headed off into the married and working world.
We had no real idea what lie in store for us, but we moved 450 miles away from our families and started our life together.
The first few years were a blur, at least for me. I was full time in the ministry while my wife was finishing up college and studying for the CPA exam. It was pretty easy for us to fall into the routine of life and marriage. We had no idea what we were doing.
Over the years my wife became less of a fan of me being in the ministry, too much time away, too many times when I would choose being “just one of the teenagers” and not her husband (can’t blame her for not being a fan of that). Over the course of a year, we drifted into the roommates routine. Being friendly with each other but not really sharing anything deep together.
After a particularly rough summer of ministry, I began withdrawing from the relationship. I’d spend more time out with the teens or other families at church than I would at home with my wife. In turn, she began working longer hours and being wrapped up in her career.
We fought more, although we rarely argued, there was just a chronic level of tension and disconnect. My wife and I’s relationship was distant and cold.
I was falling into the beginnings of an emotional affair with another girl. On top of this, I had a big struggle with pornography.
I would find myself sitting up at 2 AM, staring out the window into the darkness. It was hell.
One evening while housesitting for some friends, my wife and I began talking. As the conversation unfolded, everything came out.
My immediate reaction was to run. I just wanted to get away and not deal with the problems. My wife would have none of it. I saw my wife become one of the strongest people I’ve ever seen. She stuck it out. She shot straight. She didn’t play games.
I left the ministry, began a year and a half of counseling in order to restore my life and my marriage. Throughout this journey I discovered many things about myself. But it wasn’t until I began to grow up and take care of my own crap that I realized how much I risked losing.
Many years later I asked my wife what helped her stick it out – how she stayed in love with me through this valley. Her reply, you became the person I originally knew, as a man.
Somewhere along the way I wound up lost. Doing life more as a robot than alive. More concerned about what other people thought of me than what I thought of myself.
Surprisingly, this valley in our marriage only lasted a couple of months. I think it’s because we both had made a commitment to marriage for life. It wasn’t something either of us could easily throw away.
I once heard someone say to a friend that their marriage wasn’t worth fighting for. The response I heard in return – “that’s because you haven’t fought for it. Something’s only worth fighting for after you’ve fought for it.”
Sitting here as I write this, I can think of no truer words.