The Power Of One In Marriage 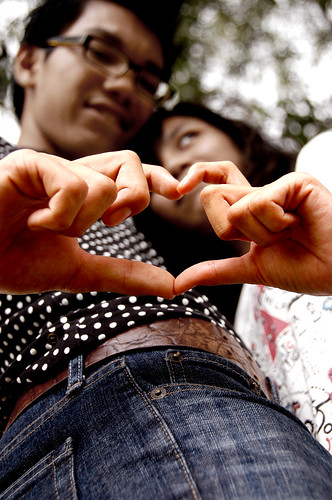 .
Editor’s Note: This is a guest post from Michael Smalley of www.gosmalley.com.
I was reading Corey’s post Marriage is all about growing up and it got me thinking (which is always a dangerous thing). My wife and I have been helping couples for almost 15 years. And do you know what we have found to be one of the most powerful ways you can change your marriage? The power of one or the power of you.
The power of one is your ability to grow up in the sense of learning how to take personal responsibility for your life, feelings, actions, and decisions. The power of one is your acknowledgment that changing your attitude and behavior will change your marriage. You have tremendous influence on your spouse. You do not have control over your spouse. You’ve probably already figured this point out. But you do have influence. So are you going to influence your marriage for the better or are you going to influence it for worse?
Back in February I made a major mistake that really hurt my wife. We were planning our youngest child’s 7th birthday party. He wanted to have his party at a place in town called Pump It Up. It is a great venue for kids and is filled from floor to ceiling with these awesome air-blown trampolines, slides, and obstacle courses. We decided to download the birthday invitations so we could fold and hand them out to all the kids in his class.
After we downloaded the invitation, I had the genius idea of making custom changes to it. My wife was thrilled by my suggestions and gave me the thumbs up to make some changes. We talked about what she wanted added to the cards and then I made the changes. She was actually quite excited about what I had done to the card! And this would be the last time she felt any kind of positive emotion about this invitation.
Unfortunately for my wife, she had to leave early the morning for work and was gone before the kids even awoke. I was in my office putting the finishing touches on the birthday invitation when my 7-year old walked in and excitedly asked what I was doing. I showed him the card on the computer and he loved it! Then he asked a question.
The answer I gave to his question will haunt me for the rest of my days. “Daddy, can you put on the card what I want for my birthday?”
Sounded like an innocent question to me, but I had no idea of the consequences my decision would reap in only two short days.
I replied with a resounding, “Of course! Daddy can put whatever you want on this card!” So my son asked for me to put on his birthday card (that was going to be handed over to every single mother in his school class), “David is requesting CASH for his birthday present.”
I still have a hard time believing that I didn’t even consider how this request may come across as inappropriate and rude. But alas, I did not. I printed the cards, folded them up, and handed them out to each kid in the class. It wasn’t till later that day, when I was sitting under the big Oak tree at my kid’s school, that I wondered if it was weird to put such a request on a birthday card. Fortunately, one of the moms in my son’s class was sitting next to me. I leaned over and asked her if she had opened the invitation yet. She said no. I then asked her if it was weird to put David’s request for CASH on the birthday invitation. Her response was classic, “Oh no. You did not put that on David’s birthday card?” I said yes. She then asked if Amy knew what I had done and I told her that she did not. The mom then said to me, “Don’t tell her.”
I’m not one to endorse keeping secrets, but this secret did feel like it had real implications on my life going on or ending.
The party came and my wife was clueless about the invitation. She started to wonder why all the moms were only bringing envelopes as gifts. She even brought this to my attention! To make matters worse, her interpretation of the cards was that the moms were not getting gifts because they were wanting to save money. She was happy that they were not getting gifts and she said to me, “I’m glad they didn’t feel obligated to buy David anything. He has enough toys as it is.” Her heart was golden, and this only made matters worse for me!
At that moment I knew I was dead! And then it happened. One of the moms, who is also a good friend of ours, came right up to Amy with David’s present. It was a nicely colored tin jar filled to the brim with coins. She was quite proud of her sarcastic moment and winked towards me! She knew what I’d done and she was making sure I got nailed for it. She then handed Amy the invitation and politely said, “I was so thankful your husband let us all know what David wanted for his birthday present.”
That was it. The secret was out and my wife did what any wife would do in that moment, she whacked me on the arm and then pulled me close to her lips and whispered, “We’ll talk about this later.”
How can the power of one help me in this situation? How can the power of one help you when you’ve blown it similarly (but hopefully not as bad as I did)? Here are three things you can do when you’ve messed things up with your spouse. These are all ways to take personal responsibility in your life:

When we got home from the party the first words out of my mouth were, “I’m so sorry for what I did to the birthday invitation. You must be humiliated and utterly mortified (I tried to use really big words). What do you need from me to make this right?” It was only a couple of sentences, but they immediately calmed my wife down and she was able to share with me how embarrassed she was and what I needed to do to repair the damage. No yelling. No fighting. Taking personal responsibility is fun because it makes your relationship easier and more satisfied.
You might even say it makes your marriage simple.